Many, many years ago I was young. And when I was young, I was considered a tad musically gifted, somewhat idealistic, precocious and opinionated (I was considered a lot of other things, too, but let’s not go there, shall we….?). As young people tend to be, I had a lot on my pre-internet, hyperactive, creative little mind, about a panoply of things. Around age 15, however, because of a group called Up With People!,  I had an early “a-ha moment”. I wanted to make the world a better place.

In my sophomore year of high school, I attended a production of Up With People! at the University of Arizona auditorium. The cast seemed like superstars to me and just a few years older than I, representing a wide swath of seemingly every ethnicity, nationality and religion – dancing, singing and celebrating. They were celebrating and encouraging the power within each of us to actually make a difference, through music, education, dialogue and community service. What’s not to like, I’m thinking…

Flash forward six years. Still young, talented and idealistic, and after interviews and a vocal audition, I was accepted as a member of the national touring cast of Up With People!, flying across the country to Burlington, Vermont for several weeks of staging and rehearsals. It was intense, challenging, exciting, uplifting, frustrating and an ultimately exhilarating experience as I sang and danced my little 20 year old heart out alongside kids from states I had never been to,  and countries too exotic to imagine ever visiting. Every continent was represented – and languages, faiths and culture melded into one theme – that there would never be peace if we didn’t value each other’s uniqueness, talents, beliefs, experiences, perceptions and spirit. We needed to listen (“Seek first to understand. Then be understood”). And once our minds were opened, to put that knowledge to use in building a lasting bridge of peace and understanding. That was a powerful message for kids to embrace in the 1970’s…and even more vital today in a far more complex and polarized world order.

Because I am currently living in Mexico, I had a special chance to attend one of the many 50th Anniversary celebrations being held on several continents by the Up With People! organization, based in Colorado. Their Latin American arm is called Viva La Gente! and headquartered in Mexico City, where last weekend’s jampacked events, programs and soldout show were held.

Here’s a little mea culpa I should share. I was sick most of the weekend due to a cold that started coming on while I was flying down from Guadalajara. It got increasingly worse to the point that I missed the last part of the show itself, as well as the final banquet at the Maria Isabel, where many of us stayed. I attended the leadership briefing Saturday with UWP President & CEO Dale Penny and his senior team, which was great. I’m only sorry that my condition did not allow me to participate more fully.

The opening night of the three day series of events was the Founder’s Dinner, held at the elegant Hacienda de Los Morales, one of Mexico City’s top restaurants and events sites. Go here for more info and scroll down on their opening page to see more photos of the site itself: Facts – Hacienda de los Morales. Stunning! 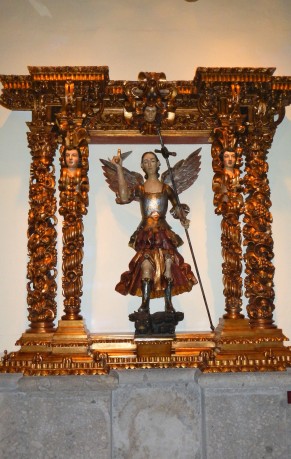 Margaritas, cognac, wines and other beverages were passed among the attendees that included top government officials, consulate reps from the U.S., Russia and other countries, former UWP cast members from Mexico and beyond, executive staff from the organization itself, donors, volunteers and media. 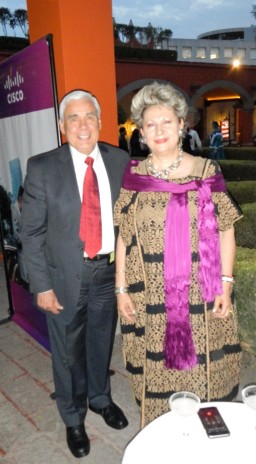 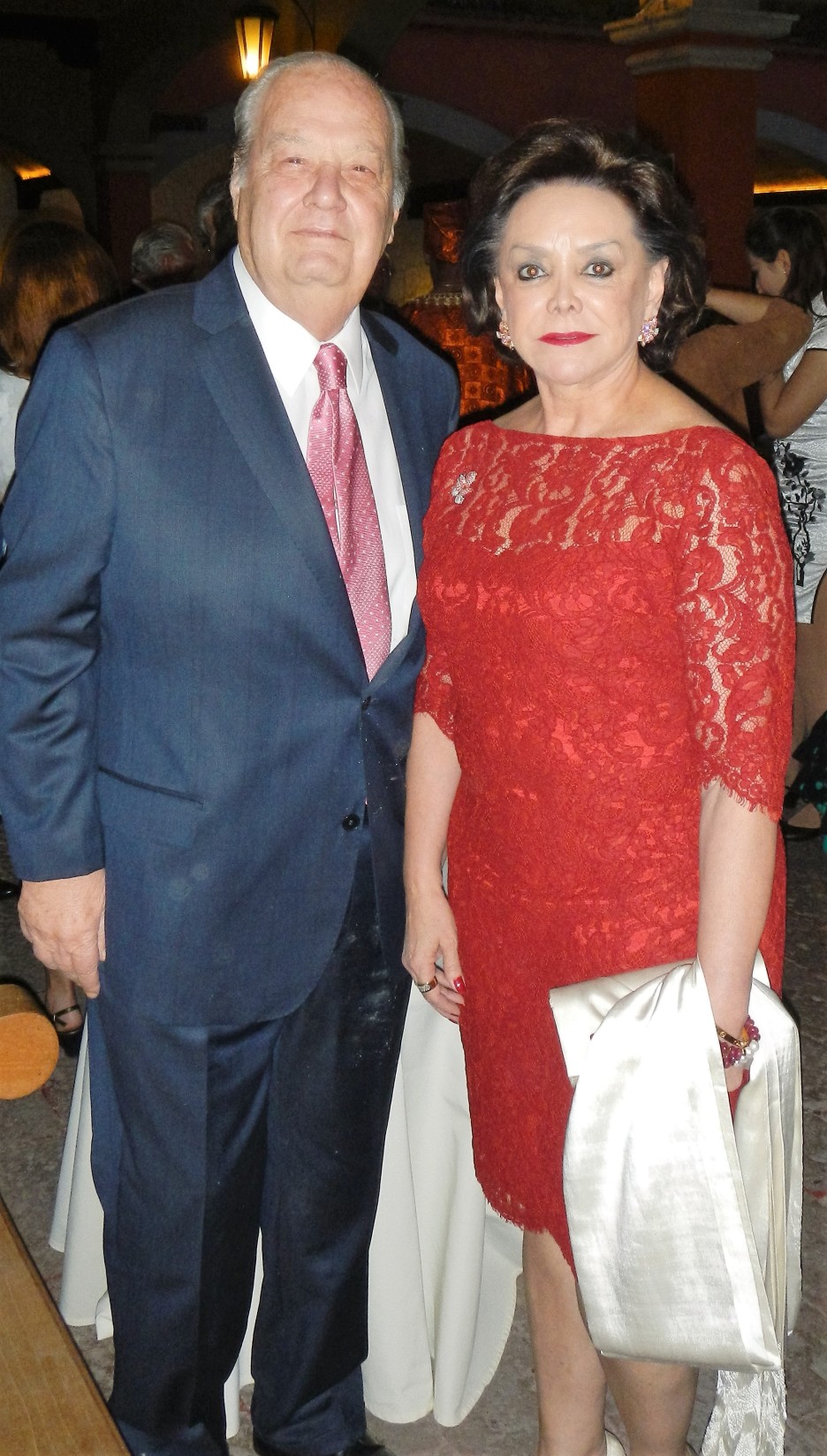 Blanton Belk, founder of Up With People! was there, along with his wife Betty (not pictured) posing with friends and members of Cast A 2016, some of whom performed during the dinner.

Other members of the cast mingled with guests in their native costumes, or those representing others in the show.

One of Mexico’s wealthiest businessmen, Manuel Arango (second from left below) attended with his wife Marie Therese and friends. Senor Arango has been a significant donor of Viva La Gente! and continues to support a wide variety of nonprofits and philanthropic activities through his Mexican Center for Philanthropy (CEMEFI), a group he founded almost 3o years ago. He also spoke during the presentations about his fondness and great respect for founder Blanton Belk. I would bet Blanton shares those same feelings toward the charismatic and charming Mr. Arango.

I made some new friends and reunited with some old ones that evening. It was great fun to see Pat Murphy who toured with my cast and is one of the most talented musicians ever, on the right in the photos below. I also sat next to a very perky and personable former publicist, current life coach and past UWP cast member, Senorita Polly Ortiz-Mena of Mexico City, to the right in the shot below right, photographed alongside one of the current cast’s most gifted singers.

Dinner was a festive affair with lots of inter-table mingling, introductions and the ultimate question asked of every former “Uppie”, “What year did you tour?”. That was always followed by the inquiry, “What countries did you visit?”. My own cast was rather landlocked on North America, but only because we were lucky enough to do television specials, corporate and commercial recordings and shows and ultimately, Carnegie Hall. We did get a month in Bermuda, however, which was one of my fondest memories of that entire year.

Dinner was a multi-course affair, but it was the dessert that became most coveted when choices of Tequila Mousse (OMG) or Pistachio Creme Brulee were offered. 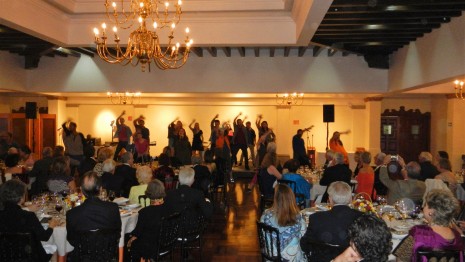 Members of Cast A 2016 did a few selections from the their new show The Journey, bringing energy and enthusiasm to an already highly animated room. 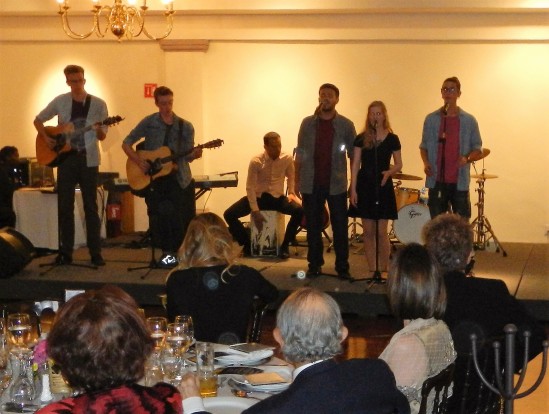 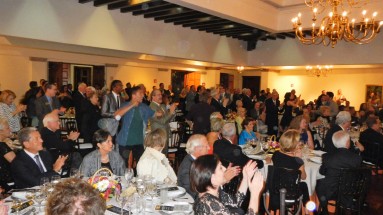 Here’s my friend Polly with the talented musical director of Up With People!, Michael Bowerman.

Most of the visionaries and original musicians who founded Up With People! in the 1960’s are still very much with us. Among them are the Colwell Brothers, three men who were known for their bluegrass and country artistry by the time they were 20 and who ended up writing much of what became the most iconic songs in the UWP repertoire through the decades. Paul, seen below left, lives on Vashon Island near Seattle with his wife of many years Catalina (Cati), daughter of the late actor Anthony Quinn. The uber-talented brothers still love to perform and did sets at both the founders dinner and at the show the following night. 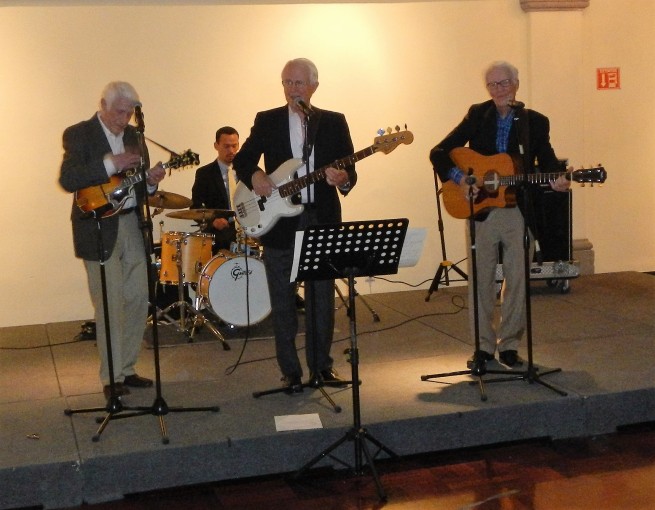 Table 14 became progressively more fun as the evening’s libations kicked in. Even though I wasn’t feeling my best, the occasion was so filled with music, laughter and memories that it was hard not to jump in…for selfies and group shots….at least! 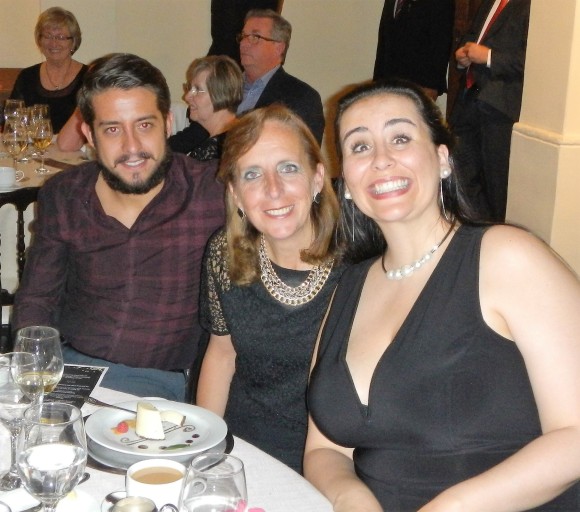 The following night, a packed house of 1500 concertgoers attended The Journey, a special show written to highlight shows through the last 50 years, including generation-specific pop songs and others written for UWP by the Colwell Brothers and dozens of other writers and composers. The performance was held at the Centro Cultural Teatro in CDMX (Mexico City) 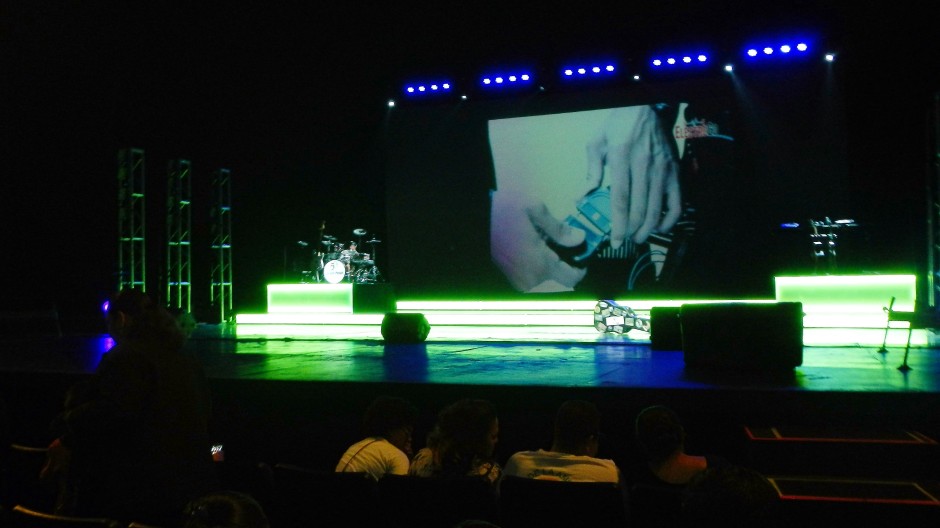 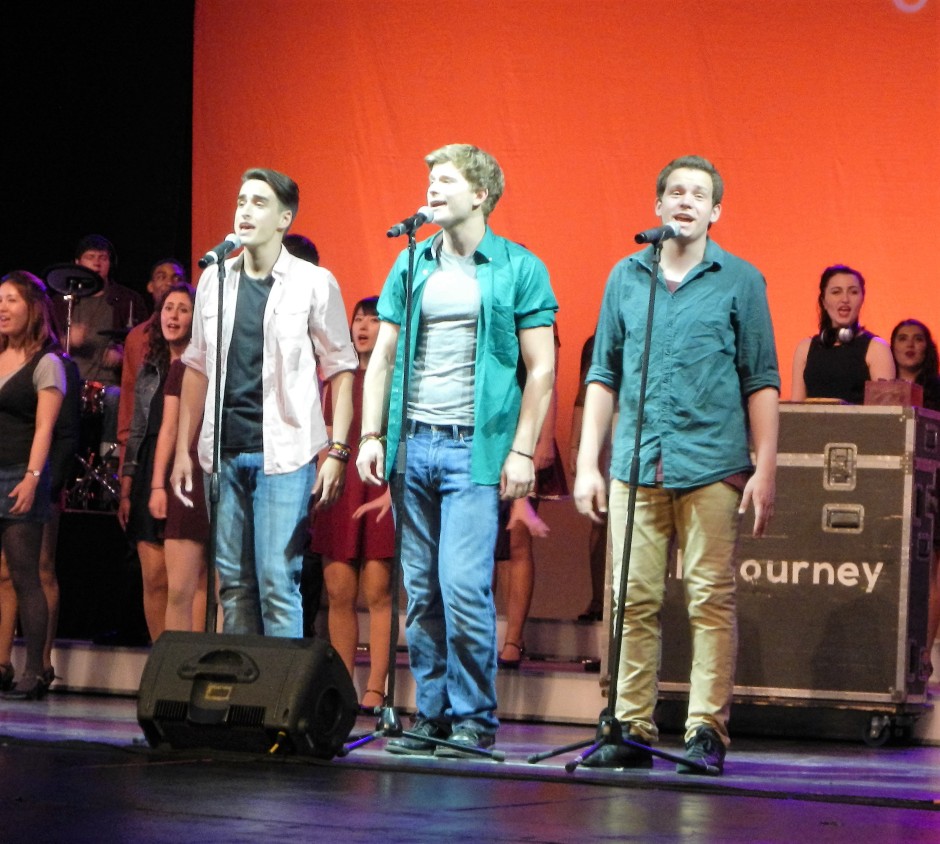 And, as would be expected, there was plenty of UWP swag available for purchase, including their new show CD, t-shirts, posters and other totally cool stuff (a phrase as applicable today as it was in 1970-something, I might add..). 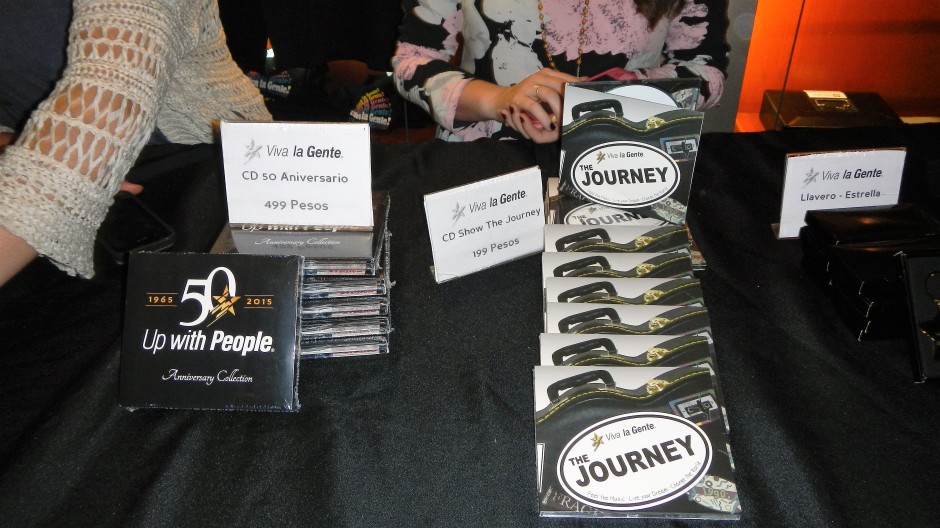 Viva La Gente!/Up With People! is still very much a happening organization, with their Global Education Program serving ages 17-28 (the one-semester program of travel, performance and community impact), the Camp Viva la Gente which offers a three week growth experience for kids 13-17 and the newer Viva La Gente, Jr., a  one-week day camp for kids 6-12. All of these programs stress international understanding and personal growth, as the 22,000 former cast members from 132 countries will attest. Over the years, they have performed over 14,000 shows in 72 different countries and have inspired young people to aim higher in their lives…and maybe change the world for the better in the meantime.

To read more about the organization, check out here (English) Facts – Up With People! or (Spanish) Facts – Viva La Gente!

Finally, it was such a kick to see so many of the “old guard” last weekend. In addition to writer, composer and musician Pat Murphy, who I mentioned earlier, I visited with Dale Penny (known long before he became President & CEO Penny…), castmate Steve Rokowski – and for the first time in more decades than I care to recall – my show director, now a highly successful Alaska businessman, Buki Wright. Talking to them was instant time regression, in the best possible way. And one thing that all of us share is the emotion that floods back to us whenever that (now) 5o year old theme song is sung. During the year(s) that we were lucky enough to travel, those words became the unspoken mantra and inspiration through some long days and often late nights of rehearsals, shows, community activities and social time that built lifelong friendships with host families and fellow cast members. Indulge me if you will by allowing me to repeat the lyrics, in both the original English and Spanish. If more people were for people, indeed. It’s the best I can do to capture the joy and spirit of this past weekend’s celebration of Up With People! at 50.

BTW, I promise to do another update after I attend the 75th…and I’ll just bet Blanton Belk and those Colwell Brothers will be there, too!

Up! Up with people!
You meet ‘em wherever you go
Up! Up with People!
They’re the best kind of folks we know.
If more people were for people
All people ev’rywhere
There’d be a lot less people to worry about
And a lot more people who care.

Begin typing your search above and press return to search. Press Esc to cancel.